Navy Pier is one of Chicago’s most dynamic and vibrant landmarks. Throughout its history, the Pier has been a center of commerce, a military base, a school, an events venue and a world-renowned destination. In fact, Navy Pier has not stopped transforming its identity since its inception 96 years ago. Perhaps one of the reasons why Navy Pier is Chicago’s (and the Midwest’s) number one attraction is its refusal to be complacent by constantly undergoing changes in purpose, offerings and culture.

Like most Chicago landmarks, Navy Pier originated from Daniel Burnham’s “Master Plan of Chicago.” Although his plan originally envisioned five piers, only one recreational pier with freight and passenger ship docking facilities was built near the mouth of the Chicago River. Formally known as Municipal Pier when it opened in 1916, it was the only pier to combine the business of shipping with public entertainment options.

When the United States entered World War I, the Pier housed several regiments of soldiers, Red Cross and Home Defense units as well as barracks for recruits. In 1927, Municipal Pier was officially renamed Navy Pier as a tribute to Navy personnel who served during World War I.

In World War II, The Navy operated several training programs at the Pier. By the time training ceased in 1946, some 60,000 servicemen – including sailors from Great Britain, Canada, Brazil and Peru and future president George H.W. Bush – were trained at Navy Pier. 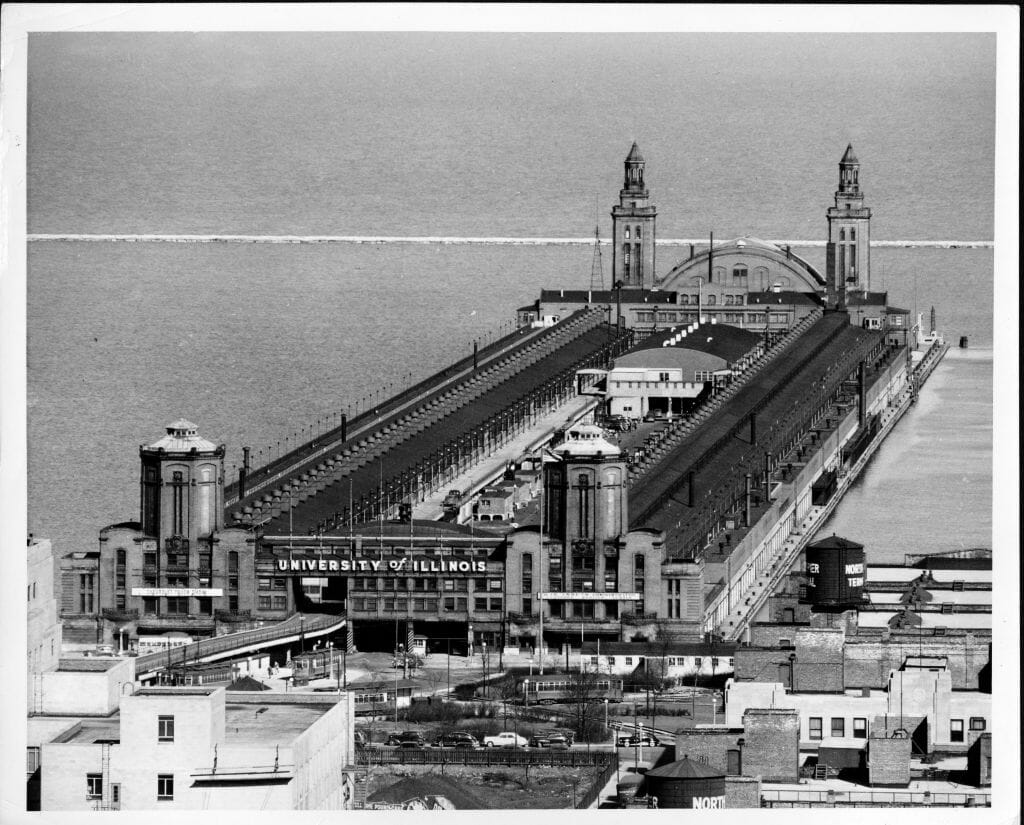 Following its use as a University of Illinois branch campus, Navy Pier became one of Chicago’s primary events venue. The original Taste of Chicago, “ChicagoFest” was held at Navy Pier. For two weeks during the summers of 1978-1982, “ChicagoFest” drew millions of visitors with music, food and entertainment. The event featured 16 different stages with about 600 performances each year. The festival’s success led to the creation of the Taste of Chicago, Loop Alive’s restoration of the Chicago Theatre and other events at Navy Pier such as the Art Expo Chicago.

Throughout the years, Navy Pier underwent various renovations. The spectacular Grand Ballroom was renovated for the city’s observance of the country’s Bicentennial Celebration in 1976. In 1995, improvements were made to nearly every aspect of the Pier as part of a $150 million Navy Pier redevelopment project, which included opening the 1,500-seat outdoor Skyline Stage.

In light of these changes, future visitors may enjoy an entirely different venue as Navy Pier is currently in the process of another resdesign.

Next week, in Part II of this post, we’ll address some dramatic plans recently unveiled to further transform Navy Pier. Do you have memories of Navy Pier before it became the destination we know today? Please share your stories.

What’s in a Name? According to Chicagoans and the Commercial Real Estate Industry — Everything

The Rebirth of a “New Age Skyscraper” in Downtown Chicago: The Monroe Building Renovation