BOMA/Chicago commissioned JLL to conduct a research study analyzing the economic impact of our building members. This study was conducted to better understand our members’ economic value to the City of Chicago, as well as glean critical information on the state of Chicago’s commercial real estate industry. It was also intended to expand upon previous Economic Impact Studies commissioned in 2012 and 2006. 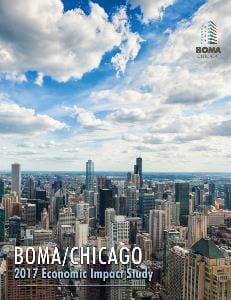 Since 2012, average vacancy in Chicago’s Central Business District (CBD) has dropped more than 34 percent, averaging 10.3 percent in 2016, and gross rents have increased 23.5 percent, averaging $38.20. These gains are surely strengthened by the job growth Chicago has experienced over recent years, along with a continued diversification of industries.  Moreover, Chicago remains a corporate headquarters hub, with Fortune 500 companies expanding two-fold and the number of businesses housed in Chicago office buildings increasing by 25% since 2012.

Our research indicates there are several key trends driving increases in occupancy:

What is the economic impact of this steady growth and momentum in the market: 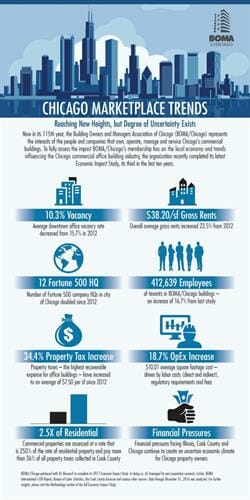 Chicago’s office buildings are more than just a stunning skyline; they contribute to our economy, city and environment in myriad ways.

Chicago commercial office buildings spent nearly $2.2 billion in operating expenditures in 2015, injecting $4.6 billion into the local economy – an increase of 31.3 percent from 2012. New personal earnings – labor income generated as a result of both the jobs supported directly by this spending and the jobs supported indirectly by the re-spending of these dollars for consumer goods and services – reached $1.4 billion, representing a 33.4 percent increase from 2012.

Chicago’s office buildings also continue to be national leaders in sustainability. Building owners and managers have embraced energy efficiency not only because it’s the right thing to do, but also because energy reduction has proven to reduce costs for their assets and for their tenants. In 2016, office buildings across the Chicagoland led the nation with the greatest total square footage of buildings with Energy Star or LEED certifications, increasing its percentage of green stock by 6.5 percent from 2015 for a year-end total of 66 percent.

Despite many of these positive market indicators, threats still exist, that could harm the ability to attract and retain tenants, while also operating buildings in a sound and efficient manner.

Moving forward, this report and the data contained within will be important tools for our government affairs efforts as we continue to advocate on your behalf. We encourage you to review the report and share any feedback or questions you may have with us.

BOMA/Chicago would like to thank the leadership of the Economic Impact Study Task Force, and the Communications and Taxation Committees for seeing this important initiative through to fruition.

Why Expand the State Street SSA and Increase Taxes to Pay for It?