As referenced in BOMA/Chicago’s 2017 Economic Impact Study, Chicago property taxes are higher than the average of comparable cities at $7.50 per square foot, placing the City at a competitive disadvantage. In fact, commercial properties pay over 36 percent of all prop­erty taxes collected in the City of Chicago, of which office buildings pay nearly half.

Property taxes continue to be the largest, single recoverable expense for commercial real estate owners in the City of Chicago, with average property taxes rising 34.4 percent to $7.50 per square foot since the 2012 Economic Impact Study. Because property taxes and other operating expenses are passed through to tenants under the typical lease, net effective rents are growing more slowly than gross rents. Additionally, the looming budget and pension crisis facing the City of Chicago and the State of Illinois threatens to compound that property tax burden and its effects on rents.

BOMA/Chicago advocates for fiscal responsibility, transparency and fairness at all levels of government that contribute to the property tax levy and tax burden of Chicago commercial office buildings. BOMA/Chicago remains opposed to artificial manipulation of a fairly distributed tax burden.

BOMA/Chicago has created a property tax index using a population of approximately 190 BOMA/Chicago member buildings located in the Central Business District. The index allows BOMA/Chicago to track and monitor the effect of changing assessments and tax rates over time. 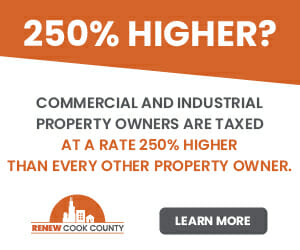 BOMA/Chicago’s State of the City Aldermanic Discussion and Luncheon

BOMA/Chicago Continues to Meet with Editorial Boards on Property Taxes

No Late Fee on Cook County Property Taxes through October 1