Energy Efficiency: What Your Building Can Learn From 200 West Monroe

As commercial buildings across downtown Chicago continue to identify ways to cut energy usage, they’re finding they need to pull off delicate a balancing act between energy efficiency, related costs, and tenant comfort. BOMA/Chicago member Lee Hebert, Property Manager with Accesso Services, has effectively tackled this issue at 200 West Monroe. We sat down with Lee – who is also a member of BOMA/Chicago’s Energy and Sustainability Committee – to learn more about his success in cutting energy usage and costs with the help of ComEd’s Energy Efficiency Program and some of our Affiliate Members.

Tell us a little bit about the building itself here at 200 W. Monroe so we can gain a sense of the size of what you’re tasked with handling on a daily basis as Property Manager.

It’s a mid-size structure with 23 stories and 635,000 rentable square feet. The building was constructed in 1973 as a workhorse building with LaSalle National Bank occupying about 80% of the building. It also was home to the busiest Burger King in the US which is ironic since Equinox Gym now occupies their former space. The building style follows the Brutalist Movement architectural style which was popular at that time and was used for a lot of municipal structures and colleges and universities.

People forget that this area of downtown wasn’t always a popular place to locate a business, but all of that changed once the Sears Tower (now Willis Tower, of course) was constructed. As soon as that went up, all of the sudden, this area became very popular for banking and other types of businesses to be located.

Was energy efficiency a big priority for the building? 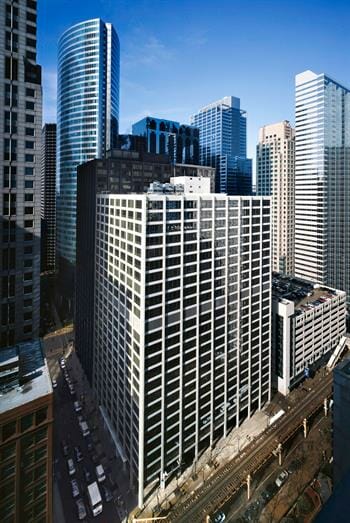 The interest in energy efficiency has grown over the years. In the past, it wasn’t a priority to be energy efficient because they didn't need to be. Electricity was so cheap, and when developers put up buildings, they typically didn't hold them – they built them to sell for a profit. Most Chicago commercial office tenant leases are triple net which means they are the ones who pay the energy bills because expenses are typically passed down to the tenants based on their proportionate share of the building.

What prompted your push toward energy efficiency after that point?

Initially, as I was working with our building engineers to gain an understanding of how our systems worked, it was clear to me that there were several opportunities to become more energy efficient. The biggest usage of energy came in the winter due to electric heat. There are 29 cabinets throughout this building that control the heat output. There was no central control system so each cabinet operated independently based off an outdoor temperature sensor. As the outdoor temperature dropped outside, the interior heat output increased proportionately. Since all of them were independent, we had no control over that. Basically you would heat up the building, then bring in cold air to cool it down – all of which was very inefficient.

While I knew there was an opportunity to reduce energy, I  didn't know what the scale of it was and wasn’t sure how to accomplish it  So I talked to ownership about doing a retro commissioning (RCx) study through the ComEd Energy Efficiency Program to identify measures that could be implemented to  reduce the building’s energy usage.

The overall recommendation from the study was for a building automation system to tie in all the heat control cabinets. The investment was a couple hundred thousand dollars. That sounds like a great expense, but our retro commissioning study built a great case for payback for the automation system.

How many years did it take to reach a payback on the building automation system?

Once the system was integrated and operational the energy usage dropped by $250K annually so payback took less than a year for the initial investment.

Wow, that’s a phenomenal timeframe. Based on the savings in energy? How did you put the infrastructure in place to do that?

Yes, it was really successful. We enlisted a couple different engineering firms, including McGuire Engineers and ESD, to help design the infrastructure, and backbone in the building to connect all the various control components.  The equipment design and installation were just the beginning because the engineering staff had to assess how the building systems would respond to this new way of operating. It took them much effort using trial and error to work with the building automation system provider and ESD to develop and implement a new sequence of operation (SOO).  It’s not like your house where most residential heating and cooling systems are the same. Most commercial office building's heating and cooling designs are unique to that project.

We then applied for a ComEd rebate based on the heat reduction protocols that were put in place with the initial base building implementation.

Can you talk about the rebate you received and how you applied it?

Definitely. We ended up getting a $102,000 rebate. I asked building ownership if we could use these funds to integrate all of our fans and other equipment into the system. A three-year equipment integration plan was already in place at the time and the rebate helped expedite the system integration and we were able to do it over the course of just one year.

Since that time, we use about 30% less electricity annually and save approximately $250,000 per year. That’s huge.

When doing tenant build-outs, some building owners will say, "We don't want to spend the money on doing the digital controls for all those variable air volume (VAV) boxes." Fortunately our ownership has been on board with our efficiency efforts. When new tenant spaces are completed with direct digital control (DDC)  , the engineering staff can see exactly what's going on from a tenant comfort and energy efficiency perspective. Most importantly, you can make better decisions because you have information how the system's responding to real-life usage. We’ve had great success with the heating system and have continued to achieve additional efficiency through static pressure and fan speed reductions, supply temperature adjustments as well as damper positioning during the day.

You recently signed up for a monitoring-based commissioning program with ComEd’s Monitoring-Based Commissioning Program. What’s involved with that program and the potential benefit for the building?

There's a number of BOMA/Chicago Affiliate Members that offer programs to monitor your systems, collect and analyze the data, and make recommendations on ways to become even more energy efficient. We worked with AECOM to start a ComEd monitoring-based commissioning program (MBCx) at the end of 2018 to get assistance with discovering measures that could be implemented for additional energy efficiency. As mentioned earlier, the building’s original design relied on outdoor temperatures to control heat output. The first recommended measure was to switch this to interior temperature control which we think will be successful.

Because the heat output was based on outdoor temperature the night time set-back always had a small percentage of heat being generated so the heat was always on overnight. The new measure will be using indoor air temperature with a 65-degree set point. The heat doesn’t come on until it hits 65 degrees, meaning we don’t have heat output most of the night.

And then there's no issue with that in the morning?

Because of the original building design, the systems are over-sized and have the capacity to get the building back up to occupiable temperatures within a couple hours. Based on the estimates being provided by AECOM, the feeling is that usage can be reduced by about one million kilowatt hours annually. To give some perspective, in the early 2000s, the average usage was about 13 million kilowatt hours a year. We're currently running between seven and eight million kilowatt hours per year and with the projected reduction of another million the total electric use will have been reduced by around 40-45% annually since 2014. The main goal of the MBCx is to continue an ongoing basis assessment of how we're performing. And as a result, we are always looking for new opportunities for reductions in energy usage and operational efficiencies.

It's a great program by ComEd that property managers and owners across the city should be aware of. I also just think being more energy efficient is in line with our identity as a city. Chicago has been named the greenest city in the U.S. for a few years in a row now in the CBRE U.S. Green Building Adoption Index and about 70% of our space is green certified.

I think it’s important for everyone to do their part in maintaining that, not just for status purposes, of course, but because it’s the right thing to do. I always like to have a purpose or meaning in what I'm doing. I view living and working in a city is a very efficient green way of living due to public transportation, land use and density. So, when you operate a big building like this, we need to create an environment for our tenants that is both as energy efficient as possible and an extraordinarily comfortable space for them to make a living. I think we’re making that happen more and more every day.

Learn more about the ComEd Energy Efficiency Program and how it can benefit your building.

Just How ‘Fair’ is the City’s New Fair Workweek Ordinance?